I love the smell of wort in the morning.

It’s the smell of homebrewers hard at work.

Such was the case this morning in Lakeside. The lot next to Original Gravity Homebrew Supplies was bubbling with activity–and with unique beers being crafted.

David Leon and Jesse Gilbert, for example, were birthing a batch of honey ginger kolsch using malt donated by Hardywood Park Brewing Co. They plan to use three different strains of yeast to ferment separate batches of the brew, just for the fun of it. 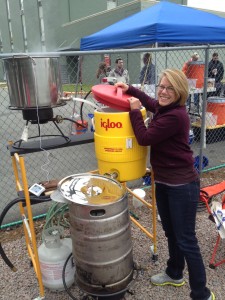 A few yards away, Anna Shore was brewing some honey hefeweizen, using local wildflower honey. She and her husband, Ed, have “tried lots of honey and little honey” to compare different flavors, she said.

Meanwhile, Ron Edmunds was offering tastes of his peach cider. Marcus Brown was discussing his porter-cider recipe. And others were hovering over brew pots with equally exotic concoctions.

All are members of the James River Homebrewers, and the event, Big Brew Day, was in observance of the American Homebrewers Association‘s National Homebrew Day. With an estimated 750,000 homebrewers in the country, it’s likely a whole lot of beer was being brewed in similar situations across the nation.

Some members have been brewing only for months, he said. Others, such as Anna and Ed Shore, for decades. “I bought him his first kit about 20 years ago,” she said, and one brew has led to another. They have a website, www.solsticebrewingva.com, that keeps friends and followers up to speed on their brewing adventures.

For some, homebrewing conjures up possibilities of turning a hobby into a profession. For others, it’s just a chance to experiment and flex creative muscles.

“I just like to think outside the box,” Brown said.