Among the lessons learned during our current turmoil is that the causes and people we put on pedestals can quickly go from burnished to tarnished. The present is a fickle judge of the past, and by the time a grandson becomes a grandfather, a symbol of glory can turn to a target of disdain.

That said, certain values endure. Someone who rises above adversity to weave a tapestry of achievement and raise the bar of human endeavor continues to earn our esteem. In the American experience—especially in the light of Black Lives Matter and the deconstruction of the Confederate legacy—stories of once-enslaved women and men who became beacons of accomplishment inspire us in ways that monuments to warriors do not.

Imagine my surprise when I stumbled upon a treasure trove of such tales while researching beer history.

In 1938, the Pfeiffer Brewing Company, based in Detroit, launched a series of advertisements in celebration of Negro History Week (the precursor to Black History Month). The ads ran in the Detroit Tribune, a prominent Negro weekly, and each spot included a short profile and artist’s sketch under the title “Builders of History and Civilization.”

In launching the series in its issue of Feb. 12, 1938, the Tribune stated: “The story of America is starred with the names of illustrious Negroes who have brought their gifts to the betterment of this country. Ever since Crispus Attucks, the first man to die in the war for Colonial independence, the Negro race has maintained its contributions. America could never have become the country it is today were it not for men such as Frederick Douglass, the great statesman, Booker T. Washington, the great educator, or a woman such as Sojourner Truth. Nor would American literature possess its present richness without the brilliant poems of Paul [Laurence] Dunbar, James Weldon Johnson and Countee Cullen—nor American music its charm and power, without the great Negro spirituals written by numerous unknown composers—nor musical art its widened phases, without a Paul Robeson and countless others.” 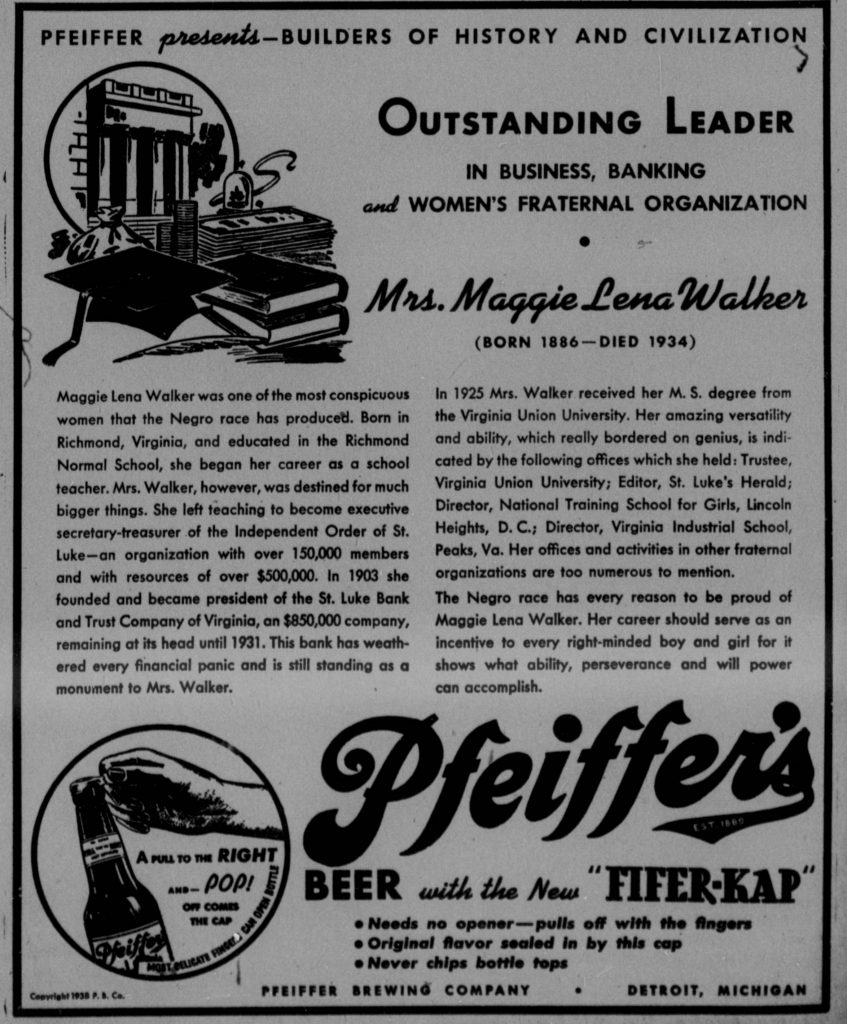 Other factors add to the richness of this moment. Pfeiffer Brewing Company, begun by German immigrant Conrad Pfeiffer in 1889, made concerted efforts in hiring blacks in the years following Prohibition—a time when segregation was rife and federal civil rights laws were but a dream. In 1935, Pfeiffer had “the first colored salesman for a brewing company,” according to the Tribune, by promoting Henry Cummings, one of 12 black employees. “Mr. Cummings’ appointment opens a new avenue for employment as salesman for the concern. … The management of the brewery plans to employ colored workers in any positions which they can be placed,” the newspaper reported. 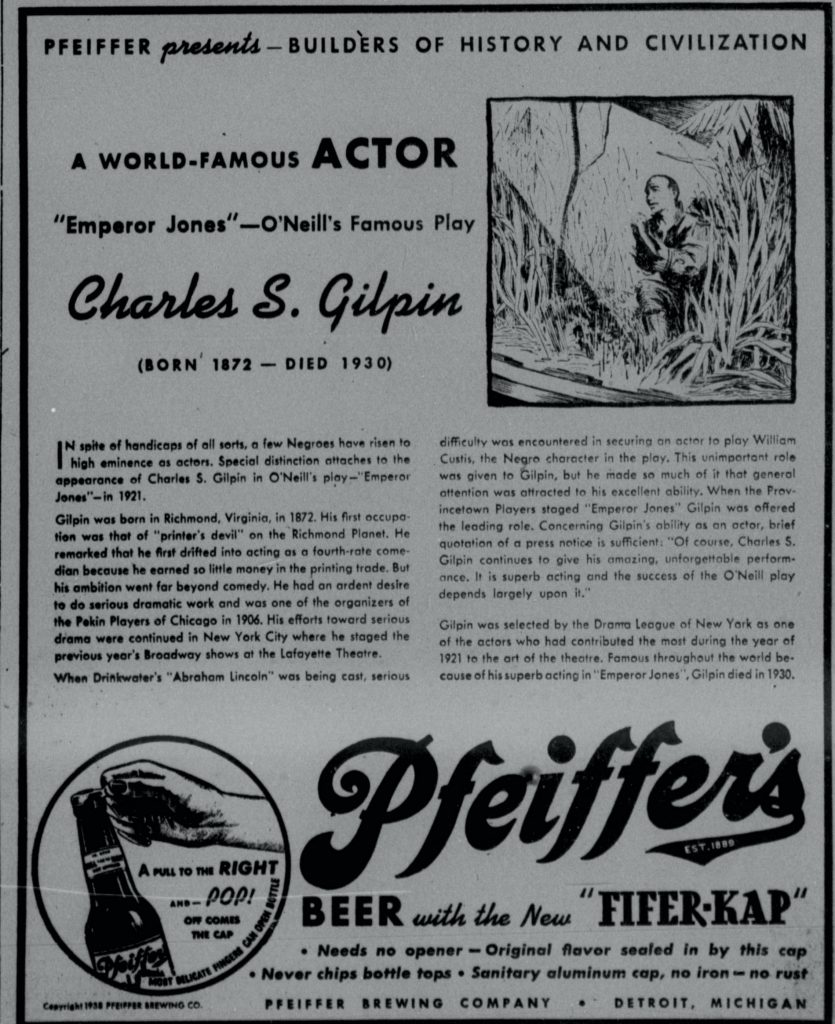 The Negro History Week ad campaign sprang from that framework, and early entries sounded a theme that would be repeated—men and women rising from the shadows of oppression to positions of prominence. Take Dr. James Derham, for example. “[He] was born in Philadelphia over a decade before the American Revolution. Still just a young lad, he was purchased by a physician for whom he soon began to perform minor duties in a medical capacity. Barely had he reached manhood when he was again sold—this time to another physician in New Orleans.” He went on to learn French and Spanish, and “his education and medical proficiency enabled him to win his freedom” and establish a medical practice.

Another: “Henry Highland Garnet was born into slavery Christmas Day, 1815. In 1824 his parents escaped and settled in New Hope, Pennsylvania, where young Henry had his first schooling.” He went on to become a teacher, minister, lecturer and Abolitionist, giving a speech at the 1842 National Convention of Colored Citizens that “was so radical that the convention refused to adopt it, but six years later John Brown had it published at his own expense.”

Richmond’s own John Mitchell also was a child of slavery, born in Henrico County in 1863. As editor of the Richmond Planet, “he displayed courageous efforts to abolish the lynch law, and the fact that he was a Negro and lived in Richmond did not hinder his attitude.” 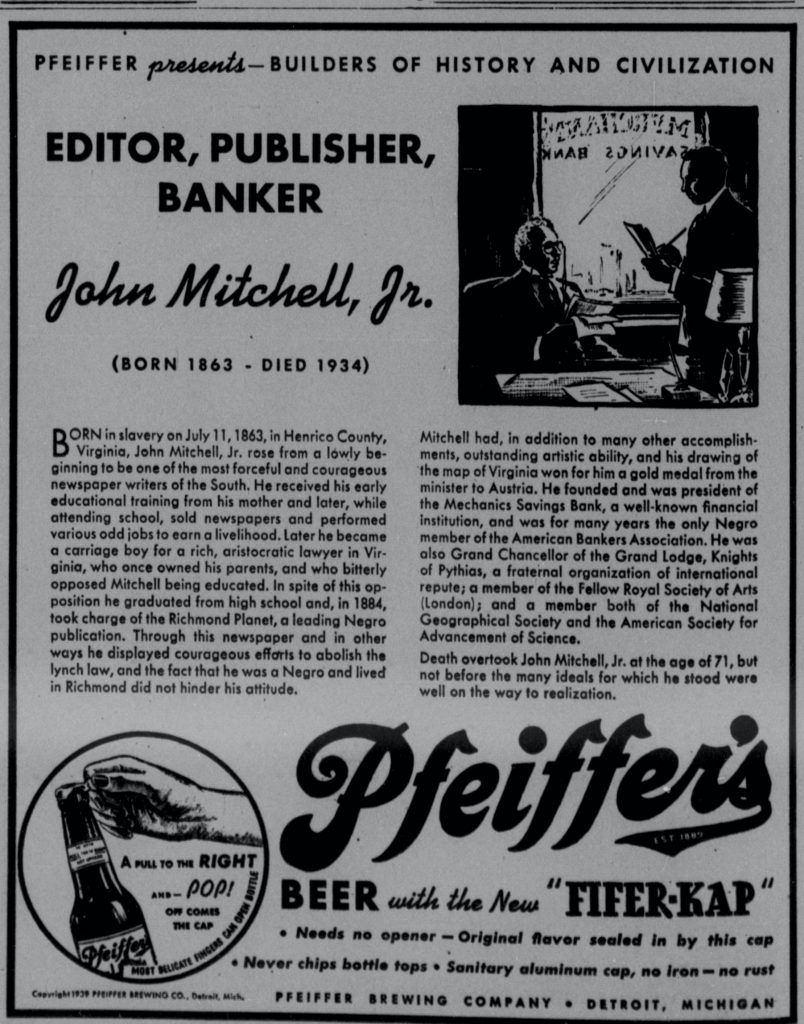 The ads continued through 1938 and gained such popularity that Pfeiffer announced in February 1939 that it would continue the series. “The great number of letters, telephone requests and other appeals which have been received, urging the continuation of this historical advertising, impels [Pfeiffer] to accede to popular demand.”

Perhaps not coincidentally, the brewery also reported record sales of its beer that year. And this touches on a possible reason a white-owned brewery would take such an interest in black history. An area of Detroit called Paradise Valley was known as a center of black culture and enterprise; it was called “the Harlem of Detroit.” On one level, Pfeiffer executives must have been eyeing the bottom line by appealing to black consumers. But Pfeiffer’s record of employment and the high regard for the brewery expressed in the pages of the Tribune reflect a sincere interest.

Popularity of the series continued to swell, and a year later Pfeiffer sponsored a full-page ad with condensed biographies of 54 “men and women of rare courage and talent.” Prince Hall, “founder of Free Masonry among Negroes in America”; Dr. Daniel Hale Williams, “first surgeon to make a successful operation on the human heart”; John Langston, “first Negro to hold an elective office in the United States” (and a native of Louisa County); William Wells Brown, “first Negro historian” (born a slave); Benjamin Banneker, “an early American astronomer [and] mathematician” (Thomas Jefferson invited him to help lay out the design for Washington, D.C.); Lott Carey, “first American missionary to Africa” (another Richmonder born into slavery)—the list sparkles with people of achievement. 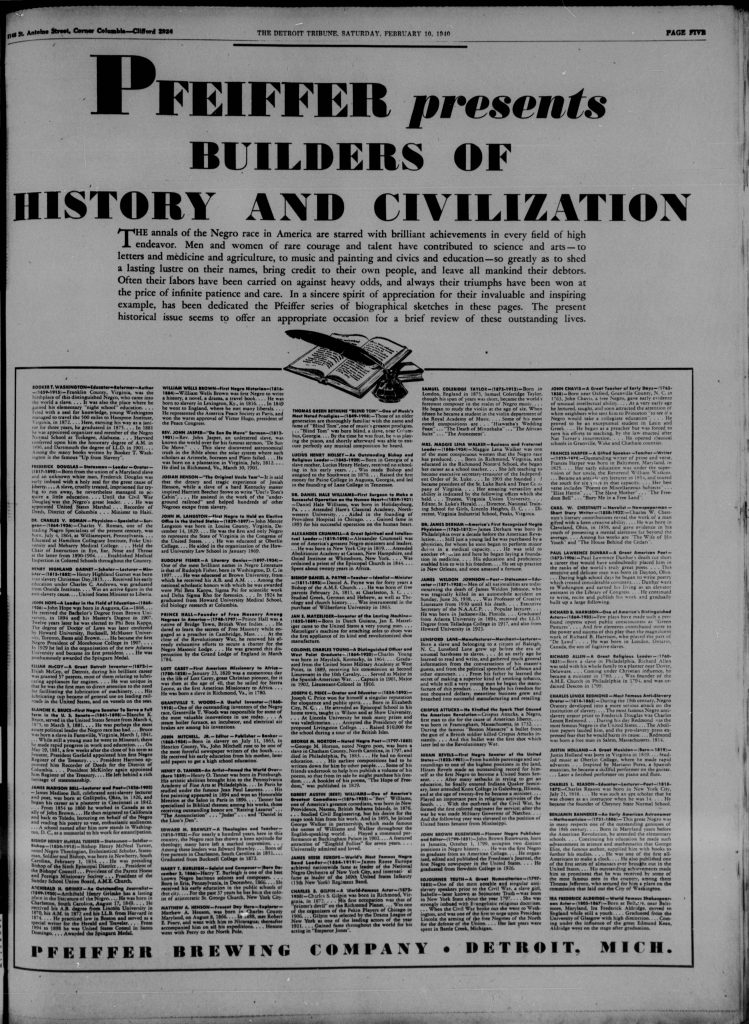 Pfeiffer’s campaign continued to raise interest and praise. The Tribune (which assuredly was happy to have the ad revenue as well as the history lessons) congratulated the brewery “for their foresight in bringing this worthwhile and much needed information to the public.”

The effort peaked in May 1940, when the Negro World’s Fair was held in Detroit “to celebrate 75 years of Negro progress.” The exposition included a Negro Hall of Fame, displays by Negro colleges, lectures, scientific displays, business representatives and a choral concert. It also included Pfeiffer’s exhibit with free copies of booklets profiling 25 leaders from the brewery’s history series. The Tribune’s coverage noted, “One of the most effective exhibits here was that of the Pfeiffer Brewing Company. If you went to the exhibition, you probably visited it, for a count of attendance that of some 250,000 who entered the gates, fully 200,000 dropped in at Pfeiffer’s. … Imagine the surprise and gratitude of the sponsors when [Pfeiffer’s booklet] of many thousands was exhausted and requests made for thousands more.” 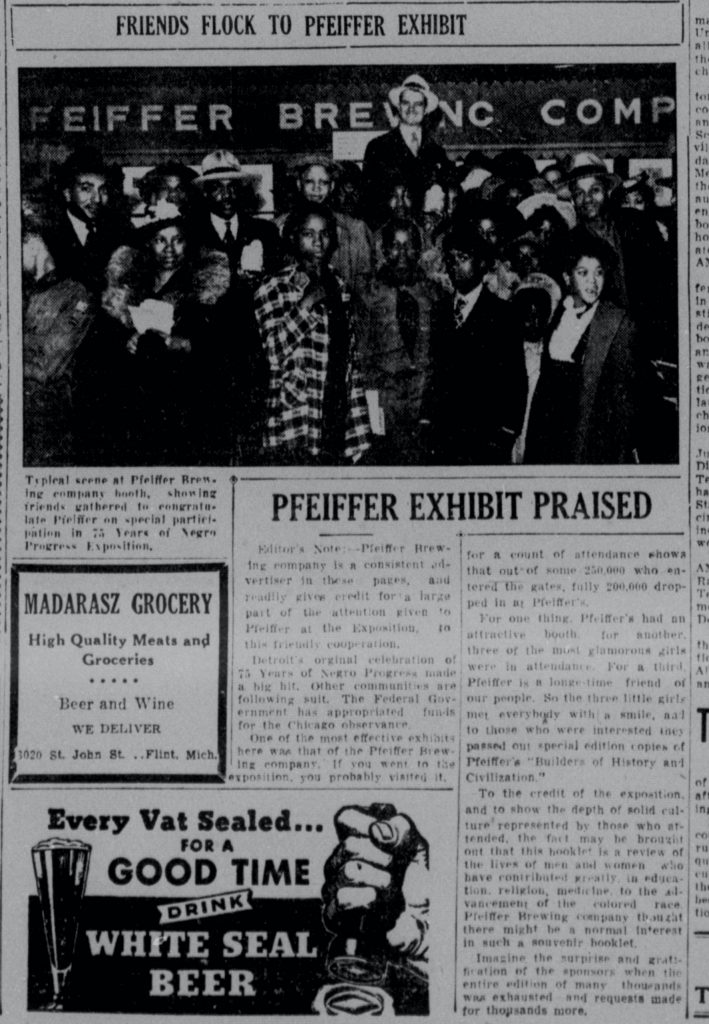 Obviously, the thirst for black history was as great as that for Pfeiffer’s beer. The ad campaign waned until 1942, when another full-page ad profiled 50 men and women, ranging from Mifflin Wistar Gibbs, “first Negro judge in the United States,” to Bert Williams, “one of America’s greatest comedians.”

One final footnote to this tale. Ben Henderson, a longtime black employee at Pfeiffer who rose to become general sales manager, left the company in 1942 for another sales job in Detroit. His new employer? The Paradise Valley Distributing Company, which at the time claimed to be “the world’s only colored beer distributors” (see my story).