Join Jay Burnham and me on the RVA Beer Show as we talk with Mark Thompson, one of the seminal figures in Virginia’s craft beer scene. 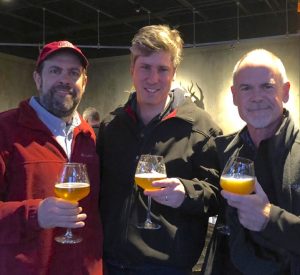 Mark Thompson (left) joins Jay and me at The Veil in Scott’s Addition.

Thompson founded Starr Hill brewery in 1999 on West Main Street in Charlottesville–in the same building that held Virginia’s first brewpub–and led Starr Hill to becoming the state’s largest craft brewery. As chairman of the Virginia Craft Brewers Guild, Thompson worked with state officials and other brewers to improve the landscape of craft brewing in the Old Dominion. Listen as he recalls those early days, takes a look at the current scene and describes his new project, The Brewing Tree in Nelson County.