I felt my father’s presence strongly at a beer event earlier this week.

Gov. Terry McAuliffe toasted the release of a collaboration among Stone, Ardent and Hardywood Park craft breweries. McAuliffe had a voice in designing the beer, an imperial stout made with Virginia blackberries and raspberries. 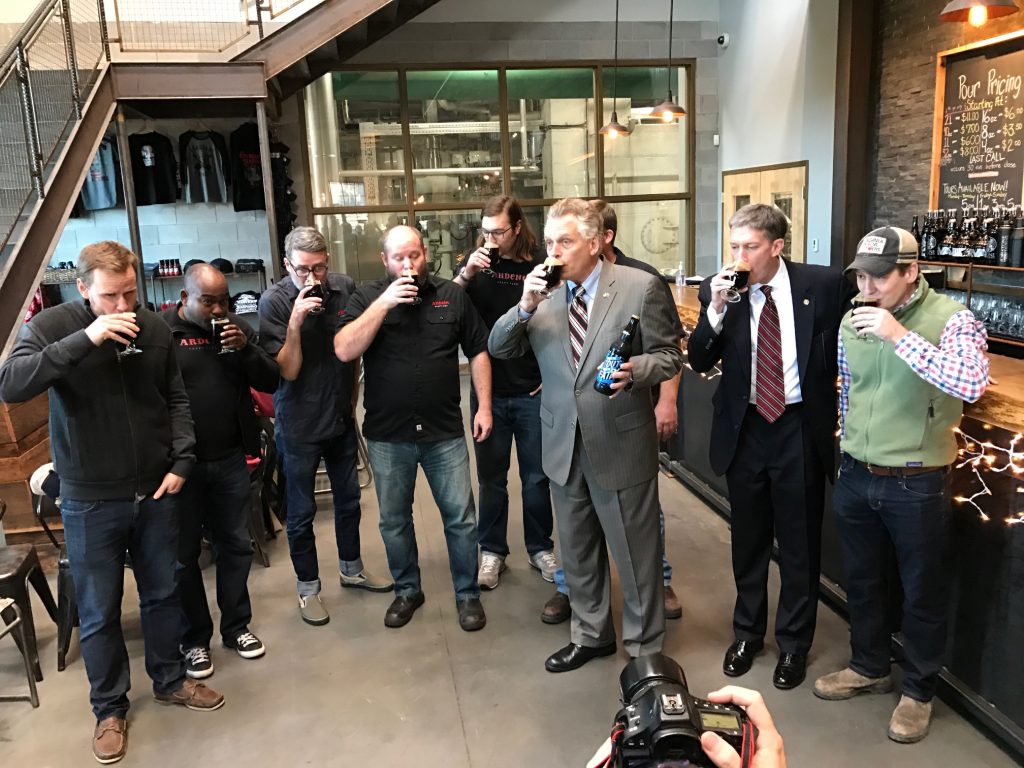 Gov. Terry McAuliffe (third from right in gray suit) and Todd Haymore (second from right), Secretary of Commerce and Trade, join representatives from Ardent Craft Ales and Hardywood Park Craft Brewery at Stone brewery in Richmond to celebrate the release of Give Me Stout or Give me Death. Photo by Lee Graves

The name of the beer: Give Me Stout or Give Me Death.

The phrase pays homage to perhaps the nation’s greatest ultimatum–“Give Me Liberty or Give Me Death”–uttered by Patrick Henry in 1775 at St. John ‘s Church in Richmond. The words fanned the flames of revolution and have been iconic in identifying an element of our spirit–remember that Virginia’s motto is “Sic Semper Tyrannis.”

The stout is not the first beer to borrow from that fiery rhetoric. Triple Crossing Brewing Company, which opens its expanded operation in the Fulton area of Richmond this week, produced a robust porter named Liberty or Death based on an English recipe from 1855.

The reason for my late father’s looming presence at Monday’s release in the Stone taproom has to do with Patrick Henry’s broader legacy. My dad spent his retirement years involved in all kinds of projects, from helping to invigorate a local library to transforming a ramshackle, deserted schoolhouse into a profitable restaurant. I believe his proudest and most useful project, however, was serving as president of the non-profit Patrick Henry Memorial Foundation. In that capacity he led an effort to have Red Hill, the final home and burial site of Henry, designated as the national memorial for Henry. It took years of letter writing and lobbying for the act to get through Congress; but dad’s “Give Us a Memorial or Give Us Your Heads” persistence paid off with the official designation in 1986, 250 years after Henry’s birth. 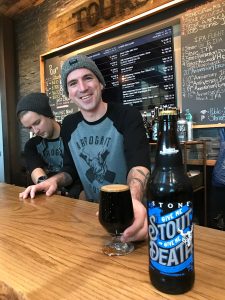 What most people don’t realize is that Patrick Henry’s devotion to the cause of liberty goes far beyond those seven words. Henry was Virginia’s first governor, serving five terms and shepherding the state–and the infant nation–through trying times. He also was an adamant advocate of the Bill of Rights during the process of adopting the U.S. Constitution. It’s hard to imagine our country without those protections today.

It also turns out that Henry–along with George Washington, Thomas Jefferson and other Founding Fathers–was a beer lover. These men enjoyed beer not only for its convivial aspects but also for its role in commerce and as a beverage of temperance. So McAuliffe was treading on familiar gubernatorial turf in proclaiming beer’s importance, as well as his approval for the brew at hand.

“Best beer ever made!” he said, a glass in one hand and a just-opened bottle in the other. Flanking him were folks from Ardent, Hardywood Park and Stone, as well as Virginia Secretary of Commerce and Trade Todd Haymore.

McAuliffe had requested that the collaboration produce a bold beer, and the stout takes no prisoners with its richly roasted malt presence and 9.5 percent alcohol by volume. The berries are understated and add complexity to the flavor, especially a fruity tartness as the beer warms. Peter Wiens, director of East Coast brewing operations for Stone, told me that Belma hops were chosen because they add a berry quality as well as citrus notes and bitterness to balance the malts. A follow-up version of the collaboration–Give Me IPA or Give Me Death–is scheduled for February.

I think my dad would have liked this beer. He became adventurous in exploring new brews, partly I think to accompany me on my explorations in the beer world. He was that kind of father. I’m not so sure, however, if he would have been excited about the use of Henry’s signature phrase being commandeered for commercial purposes (and this is not to point a finger at those involved in the collaboration, for their intent is honorable). Dad’s bottom line, though, was always to honor the spirit and memory of a great patriot and dedicated steward of the principles he espoused.

“Patrick Henry has been dealt short shift for many generations,” he wrote in a letter that I revisited yesterday. He was irked that a national TV broadcaster had attributed the immortal words to Nathan Hale, not Henry. “Due to the controversial nature of some of his positions in later life, and thanks to some poison penmanship of contemporary politicians, [Henry] has never received the acclaim and honors justly due. … Please give us a break and help do something to commemorate a great patriot.”

Yes, I think dad would have been a huge fan of this and any other well-made beer that would bring Patrick Henry’s spirit to our lips.