You’d have to use all your fingers and toes, teeth and nose—and maybe even your ears—to count all the collaborations among Virginia’s craft breweries.

None that I know of, however, has included the state’s governor. On Tuesday, Gov. Terry McAuliffe changed that by adding a couple of bags of hops 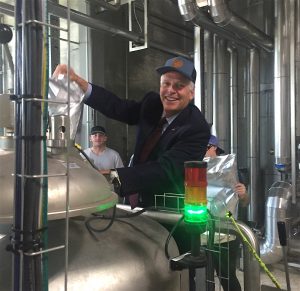 and some political pizzazz to an imperial stout that represents the efforts of three Richmond breweries—Hardywood Park, Ardent and Stone.

The last of those has been a game-changer in the RVA brewing scene. The extent and nature of that change has been much discussed since 2014, when Stone, a top-10 craft brewery based in Escondido, Calif., announced it would build its East Coast production facility in Richmond. Talk around town in the beer community at the time was mixed. Stone’s beers were held in unanimous high regard, but would the big dog overshadow the vibrancy of the local breweries?

Tuesday was testament to the contrary, and it was only the most recent evidence that Stone, brewers of some of the nation’s feistiest beers, embraces the concept of community in an industry that prides itself on cooperation and collaboration.

“Most business is a little bit more like a hockey game. You’re there to beat your opponent, and sometimes you are throwing elbows,” said Stone co-founder Greg Koch as he sat with McAuliffe and others around a conference room table at Stone’s RVA brewery.

“I think of craft beer as more like a foot race—more about your personal best. Yeah, you are often egged on by the guy catching you over your shoulder—OK, I’m being spurred to perform a little bit better. But if somebody goes down, you lend them a hand. It’s not about beating up the other guy.”

Eric McKay, co-founder of Hardywood Park Craft Brewery, said the idea for the collaboration blossomed over informal talks in various settings. “It was very organic,” he said. Patrick Murtaugh, Hardywood’s other founder, also was on hand for brew day, as were Tom Sullivan, co-founder of Ardent Craft Ales, and other members of the RVA brewing community. Stone’s contingent included co-founder and president Steve Wagner, COO Pat Tiernan and Peter Wiens, director of brewing operations for the East Coast. 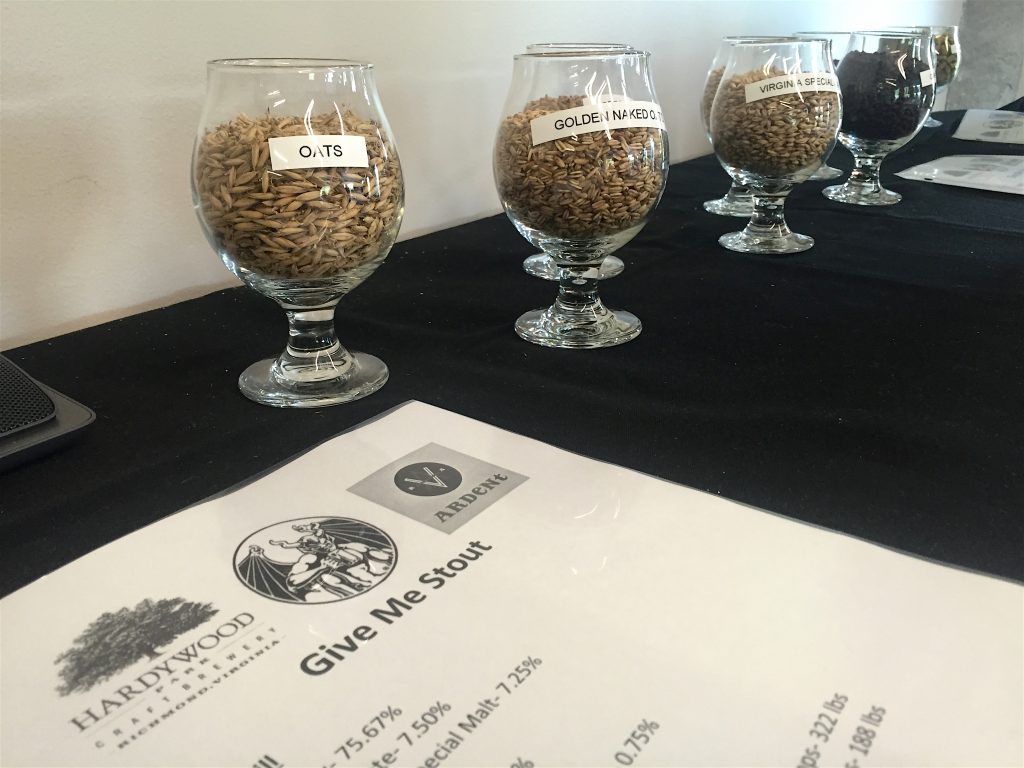 Brewing an imperial stout requires a hefty and diverse grain bill, and “Give Me Stout” is no exception. Photo by Lee Graves

The choice of beer styles—an “aggressively hopped” imperial stout named “Give me Stout or Give me Death”—reflects McAuliffe’s love of bold flavors (as every lover of history knows, the words play off Patrick Henry’s “Give Me Liberty or Give Me Death” speech in 1775 at St. John’s Church in Richmond. But did you know that Patrick Henry also was a beer lover????? Further, did you know that Triple Crossing Brewing Co. in RVA has a robust porter named “Liberty or Death?” Hmmm???? Of course you knew!).

“When I drink a beer, I want to know I’m having a beer,” McAuliffe said. “As I say, go big or go home. That’s the same thing I want in my beers.”

The Stone collab’s recipe includes Virginia-grown blackberries and raspberries, plus barley malted at Copper Fox Distillery in Sperryville. Todd Haymore, Virginia’s secretary of agriculture and forestry, remarked how the craft beer boom has been a boon to farmers around the commonwealth. Brewers take pride in using local ingredients, spurring cultivation of hops, barley and other agricultural products. 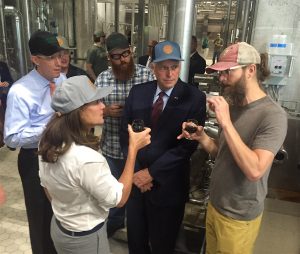 Tuesday’s event included a tour of Stone’s facility, an expansive 220,000-square-foot building in the east side of town that is projected to produce 100,000 barrels of beer during the first full year of production (one barrel equals 31 U.S. gallons). Bottles filing through the filling system provided a steady clinking; robotics moving packages of beer loomed like mechanical beasts; the bready aroma of beer-in-the-making laced the air.

Stone also is opening a brewery in Berlin, and Koch pulled out his cell phone to show McAuliffe photos of that facility. The second phase of Stone’s Richmond operation will include a restaurant and beer garden fronting the James River. If it’s anything like the Escondido layout, it will be another game changer for RVA.

I know some of you beer geeks are interested in more details about this beer, especially considering the life-or-death consequences of not drinking stout. McAuliffe’s contribution included Nugget hops for bittering; Belma hops also are being used for flavor and aroma. The grain bill consists of two-row barley malt, chocolate malt, Virginia Special Malt, oats, Special B, Carafa 3 and Golden Naked Oats. Alcohol by volume is expected to be 9.5 percent. Look for the beer to debut locally in September and be available at retailers in December.

“I will be very unhappy if we’re not in every tap in every bar in the United States,” McAuliffe joked.