Redemption comes in many forms.

For Blake Sherman and others at James River Brewery, it came Tuesday in the form of perhaps the world’s ugliest trophy.

But trophies are symbols of achievement, and for the Scottsville gang, the Best of Show award at the 2016 Virginia Craft Beer Cup competition was a thing of beauty, signifying far more than brewing one great beer. It was about turning an operation that initially suffered bumps and a bad reputation into a top-drawer destination for beer lovers. 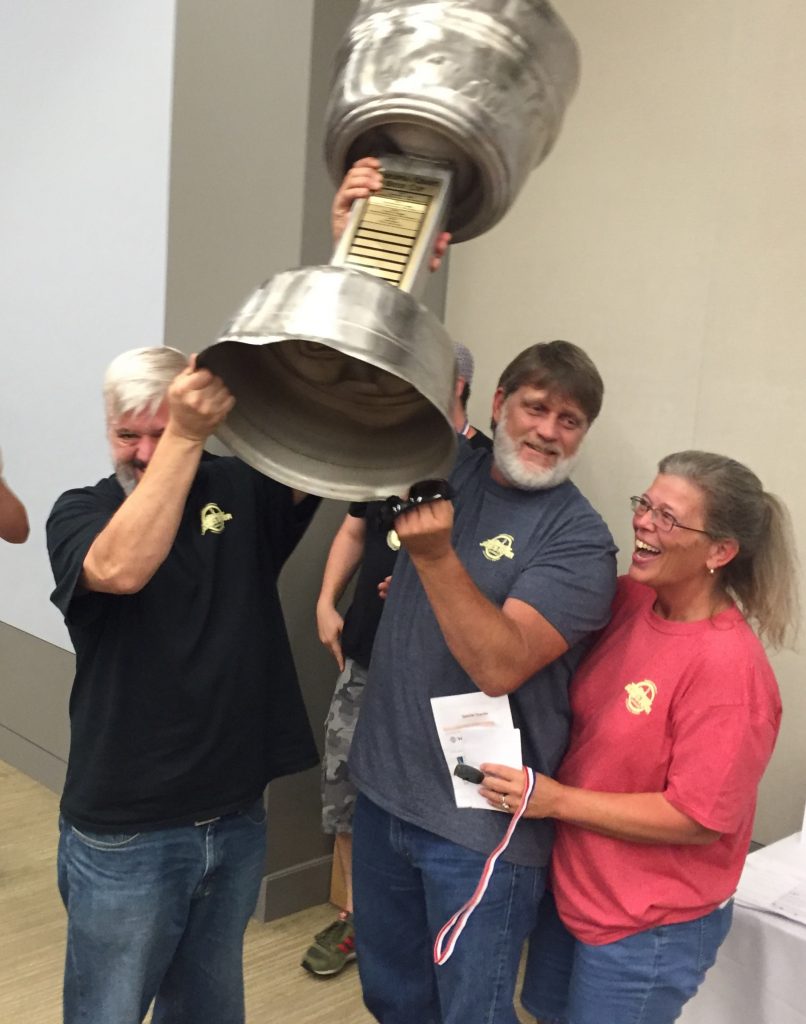 Blake Sherman (from left), Shannon Brown and Carlean Stevens celebrate with the Best of Show trophy. Photo by Lee Graves

“I’m completely shocked,” said Sherman, head brewer, at the ceremony at Westrock in downtown Richmond. “I’m on cloud nine. We didn’t expect this. We came in here hoping for the best, and I’m just amazed that this even happened.”

“We’ve had some tough times and overcome some reputation issues. To have this is huge—huge!” he said, flanked by two James River stalwarts—Shannon Brown and Carlean Stevens. He held the bulky metal trophy, made from parts of a beer keg joined in Frankenstein fashion.

The winning beer was River Runner ESB. The initials stand for English Special Bitter, a style with British roots and a reputation for drinkability, medium hop bitterness and a caramelly sweetness from the malt. This version sports 5.6 percent alcohol by volume and 12 International Bitterness Units. If you want a taste, the brewery will be pouring River Runner at the Virginia Craft Brewers Fest Saturday at Devils Backbone Basecamp Brewup & Meadows near Wintergreen.

Sherman credited John Bryce, formerly with Old Dominion and Starr Hill breweries and one of Virginia’s longtime brewing gurus, with the recipe for River Runner. Bryce and Jacque Landry, former brewer at South Street Brewery and currently at the soon-to-open Basic City Brewing Co. in Waynesboro, have been pivotal influences in turning James River around.

The brewery opened in September 2012 with a one-barrel pilot system using plastic fermenters. That quickly proved unequal to the task in terms of both volume and consistency. The search for a bigger and better setup took the owners to China, where they purchased a 20-barrel system. 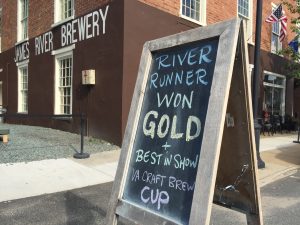 James River Brewery was quick to post notice of its award at the Scottsville tasting room. Photo by Lee Graves

Unfortunately, installing it and getting it running proved elusive. It wasn’t until Bryce and Landry came on the scene with their extensive professional experience that James River hit its stride.

Now it takes some pretty good legs to keep up with the pace set by craft brewers in Virginia. The competition has grown from 35 beers entered by 24 breweries in 2012 to 378 beers entered by 83 breweries in 2016. It’s one of the few competitions where all the judges—37 in this case—are certified according to Beer Judge Certification Program standards, said Bill Butcher, founder of Port City Brewing Co. in Alexandria.

James River’s Best of Show wasn’t the only award to raise eyebrows. Tony Ammendolia’s Final Gravity Brewing Co., a sister to his Original Gravity homebrewing supply store on Lakeside Avenue in Richmond, came away with four awards in his first year of competition. Two of those were in the Double IPA category, bronze for The Message and gold for Venus Rising.

“I’m totally thrilled,” Ammendolia said. “I had high hopes for the stout and the amber ale, but I had no expectations for any of the IPAs, going up against some of the guys like The Answer.” Larceny, an IPA brewed by Brandon Tolbert at The Answer in Richmond, won the 2015 Best of Show.

Long-time observers also noted that the awards were spread out among numerous breweries throughout the state. Silver Best of Show went to Old Bust Head Brewing Co. in Warrenton for its Oktoberfest; bronze went to Backroom Brewery in Middletown for its Lemon Basil Wheat Beer. All in all, more than 50 breweries won medals, representing areas of the state ranging from Virginia Beach to Harrisonburg, from Alexandria to Abingdon.

It wasn’t so long ago that Devils Backbone Brewing Company dominated the competition. In 2014, for example, it swept all three Best of Show medals. With the announcement in April that it was being acquired by Anheuser-Busch InBev, however, it no longer qualified as a craft brewery under the definition established by the Brewers Association.

“Also, quite frankly, what we thought was important was to be able to separate the events.” Vassey said. “This was the year to do it. We wanted to be able to set a precedent of having it at an independent location and having this stand on its own two feet.”

“We were concerned that if we separated the two events that it would diminish one or both,” Vassey said. “It’s turned out actually to expand both.”

Keeping the focus on small breweries is important, Vassey said. “I was amazed at how many brewers who have been in business less than a year got gold. That’s a great testament to the focus on quality.”

Evidence of a good event could be found in the many smiling faces that roamed the reception after the event. The space buzzed with chatter and congratulations, for newcomers like Ammendolia to veterans such as Tom Martin, whose Legend Brewing Co. won gold for a bourbon-barrel aged version of the iconic Legend Brown Ale, which won bronze.

Shannon Ely, sales representative for Old Bust Head, was one of those glowing after that brewery received the silver Best in Show. “This is wonderful. We’re in with a great bunch of breweries, so this means a lot.”

The full list of winners at the 2016 Virginia Craft Beer Cup follows: