Visiting with Brad Cooper and his family at Steam Bell Beer Works reminds me of an episode in my youth.

Two of my brothers and I were in a rock band while I was a student at William and Mary in the late 1960s. Music was our passion, and we were earnest if not talented players. The sounds of the day—what we now call classic rock—were fresh then, and we were smitten.

The handiwork of Tom Cooper, Brad Cooper’s father, and others is apparent in the brewery’s sign. Photo by Lee Graves

We faced one gig without an amp that had been stranded in Northern Virginia. My parents agreed to load the amp in the car and bring it to Williamsburg. They arrived with the rig in the trunk and stayed for our show. My mother had even made flowery bell-bottoms to wear so she could join in the fun.

That kind of family support and engagement is part of the story of Steam Bell Beer Works, which will hold its grand opening on Saturday, June 11, at the brewery in Chesterfield County. The beers, the furnishings, the planning, the marketing, the administrative duties, even the funding—all reflect involvement of family and friends to bring Brad’s dream to fruition.

Take the tables in the tasting room, for example. Tom Cooper, Brad’s dad, scavenged hundreds of pallets from Lowe’s and similar places. “We got them wherever we could find them,” Tom said, and the result is an assortment of unique, handcrafted tables that offer a woodsy welcome for patrons imbibing Steam Bell beers. 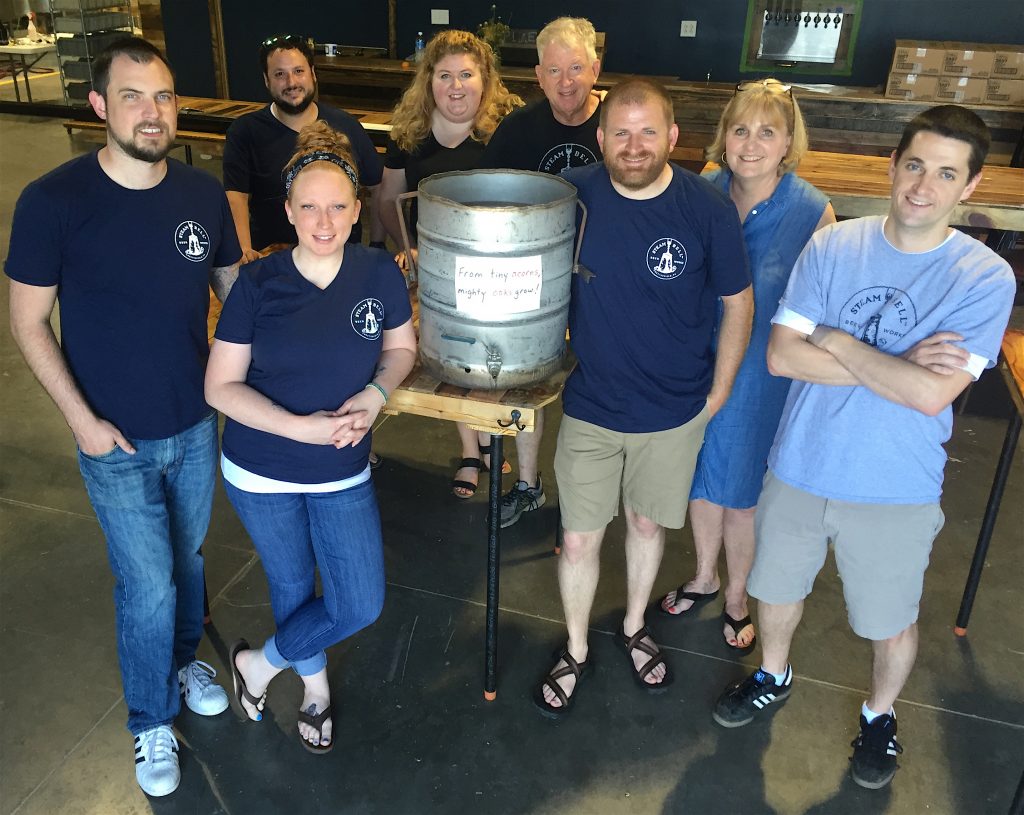 Those brews—ranging from a spicy, low-alcohol Belgian-style saison called The Grisette to a bold 9 percent milk stout called Tiramisu Stout made with coffee, vanilla beans and rum-soaked oat chips—have evolved from recipes that Brad brewed at—where else?—the family home in Chesterfield’s Donegal Forest. Connie, Brad’s mom, remembers one of those first batches. “It boiled over and made a big mess,” she recalled with a chuckle.

It took a bit of a mess for Steam Bell to be born. Brad, 28, had moved up through the ranks at a mining company to be in charge of its quality control for much of Virginia. He’d heard rumblings of layoffs and in 2014 got a phone call while at Goochland’s Field Days of the Past that he was jobless.

Ever since those first days of homebrewing when he was 21, he’d envisioned opening a brewery. So he sold his brand spanking new pickup truck and moved in with his parents, who were among those advising him that if he wanted to boldly go in a new direction, this was a time to do it. “Tom and I both were just on board with it,” Connie said. “We felt like he had that entrepreneurial spirit.”

He leased a 6,000-square-feet space in the Oak Lake Business Park off Genito Road near Southside Speedway. The area has about 100,000 residents within a five-mile radius, Brad said, and there’s a dearth of family-oriented places to imbibe adult beverages in a brewery setting. Chesterfield County’s only other brewing operation is the brewpub at Extra Billy’s Smokehouse and Brewery on Alverser Drive.

A private equity fund-raising campaign proved successful. “Most of it is from parents of friends I’ve had since I was in Boy Scouts,” Brad said. He’d mentioned his plans while at Sergio’s Pizza and caught the ear of Joey Johnson, a fellow homebrewer whose experience in beer service includes jobs at Corks & Kegs, Sergio’s and Brew Gastropub. Now Johnson is on board as second in command, mainly managing the taproom operation. “That will allow Brad to do what he does best, which is brew,” Johnson said.

Brad’s brewing is informed by stints at Hardywood Park Craft Brewery—where he started as a volunteer and worked up to an assistant brewer—and Old Dominion Mobile Canning. He’s received help from many sources, including getting equipment through Ardent Craft Ales.

The bulk of the brewing will be done on a 10-barrel system with 20-barrel tanks for fermentation and conditioning (one barrel equals 31 U.S. gallons). A 20-gallon pilot system is available for test brews and one-offs. The target for production is 1,500 barrels a year initially, and Steam Bell has signed on with Brown Distributing to get beers to market.

Unlike some breweries that hang their hats on the IPAs that dominate the craft beer scene, Steam Bell will focus on beers that are distinctive and diverse—saisons, sours, barrel-aged brews. “I originally didn’t even want to do an IPA,” Brad said. But he’s developed a floral, farmhouse approach with Time is Money IPA, which has a modest 50 IBUs and 6.3 percent alcohol by volume. It will be one of eight brews—including a bourbon-barrel aged wee heavy Scotch ale made in collaboration with the local MASH homebrew club—available at the grand opening (more taps will be online Sunday). Don’t confuse Steam Bell’s name with steam beer, the style trademarked and made famous by Anchor Brewing of San Francisco. The reference is to a piece of equipment used by coopers (get it?) to shape the staves of wood by using steam.

Brad is effusive about the Richmond beer community and the help he’s received to reach opening day. The support has made him feel, well, like family. “Everybody has been amazing. I don’t know how else to say it.”

Check out the latest details about Steam Bell Beer Works and its grand opening at www.facebook.com/steambellbeer/?fref=ts