Roads are built to connect.

The main highway from Richmond to points west, including Charlottesville, was originally called Three Notched Road because of the three slashes on the trees meant to mark the route. Now signs read Three Chopt Road.

Three Notch’d Brewing Company has adopted that pathway’s old name, and it has embraced the concept of connecting with the same enthusiasm. At the main brewery site in Charlottesville, you’ll find head brewer Dave Warwick climbing onto a stool every Thursday and raising a toast to a new beer, usually a collaboration with a homebrewer, restaurateur, non-profit organization or a beer-loving group such as the Brew Betties. 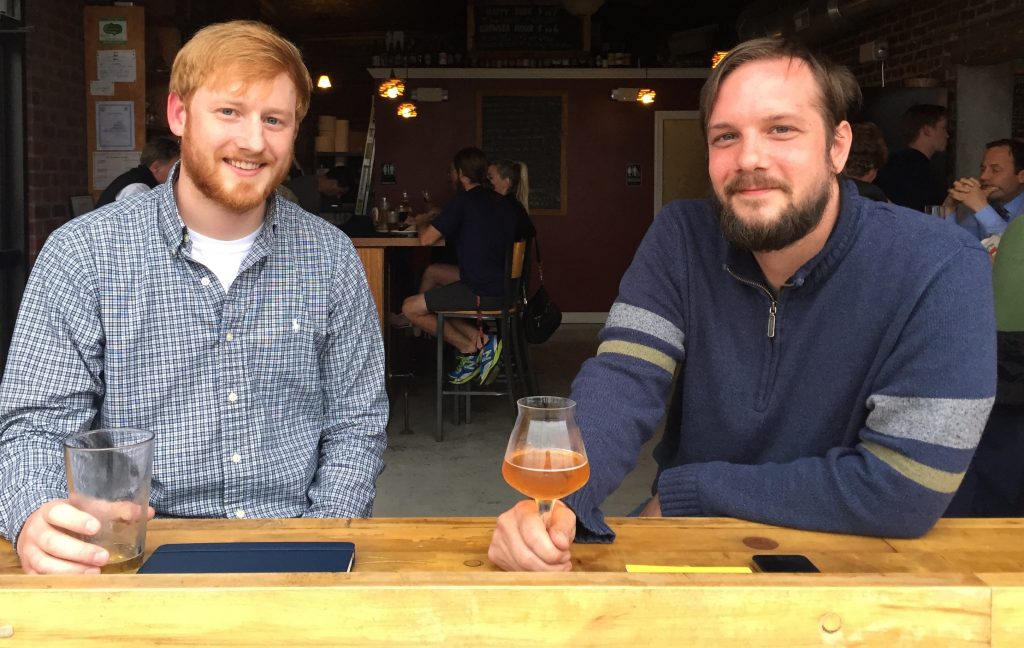 Stefan Mcfayden (left) will do the brewing and Aaron Thackery will manage the taproom at the Three Notch’d RVA Collab House in Scott’s Addition. Photo by Lee Graves

I sat down with McFayden, recently named the site’s head brewer, and Aaron Thackery, the taproom manager, earlier this week at The Cask Café on Robinson Street in Richmond’s Fan District. The café’s cozy atmosphere of friendly chatter and familiar faces—co-owner David Garrett, homebrewing wiz Tyler Kidd and others—brightened an otherwise soggy May evening.

Thackery is one of the familiar faces in the RVA beer scene. In addition to slinging beers at Specialty Beverage, he previously kept taprooms humming at Isley Brewing Co. on Summit Avenue and Strangeways Brewing on Dabney Road. Now his goal is to create a comfortable destination at 2930 West Broad Street through compelling branding, a well-educated staff and, of course, awesome beers.

That last element rests in Mcfayden’s hands. Though he’s a fresh face on the professional beer scene, he’s been homebrewing for years. He recalled his first batch—an American pale ale that was supposed to be brewed with a friend from his days at James Madison University. The buddy called in sick—strep throat—and Mcfayden was left to wade through the complexities of an all-grain batch with only John Palmer’s homebrewing book as his guide. “It wasn’t horrible, but I learned from that,” Mcfayden said.

He’s obviously learned enough to impress Warwick and others at Three Notch’d. One of the beers he supplied during the interview process was called Wild Ryed, a rye saison that weighs in at 7.5 percent ABV. “It’s very bright and very refreshing with a bit of funk in it,” Mcfayden said.

He also enjoys fashioning IPAs that are more fragrant and flavorful than mouth-puckeringly bitter. He’ll have a 3.5-barrel brewing system with a 7-barrel fermentation tank at his command and will be responsible for brewing beers—his own or collaborations—for half of the 12 taps. The other six taps will go to Three Notch’d beers such as 40 Mile IPA, No Veto English Brown Ale and Hydraulion Red Ale.

The job will be a full-time gig for Mcfayden. A 2008 graduate of Richmond’s Maggie L. Walker Governor’s School for Government and International Studies, he received a degree in geographic science from JMU and has been working with local governments in the asset management department of the Timmons Group. He joins a number of other RVA brewers—Brandon Tolbert at The Answer and Dylan Brooks at Extra Billy’s, to name two—who have leveraged homebrewing skills for professional positions.

After opening in 2013 on Grady Avenue in Charlottesville, Three Notch’d began its business model of using a small brewing system as the anchor for a satellite location in 2014 with its operation in Harrisonburg. There, brewer Mary Morgan has guided creation of beers such as Elsa’s Let It Grow Lavender IPA and Spice of Paradise Double IPA.

Other Virginia breweries have satellite sites in their sights. Richmond’s Hardywood Park Craft Brewery, for example, announced in April that it is targeting the Uncommon Building at 1000 West Main in Charlottesville for a 3.5-barrel brewery and a 1,100-square-foot taproom to open in September. Starr Hill Brewing in Crozet also is eyeing a second location, using a seven-barrel system, in the Waterside development of downtown Norfolk.

The key for Three Notch’d in its new location, Thackery said, is through building relationships in the community—restaurants, homebrewers, non-profits and more—by fostering inclusivity and creativity. “The whole idea of the place will be to get folks excited about beer and making beer with us,” he said.

That includes connecting with history, as Three Notch’d has done with its brand. 40 Mile IPA, for example, is a reference to Jack Jouett Jr.’s wild ride in 1781 to warn Thomas Jefferson and other state officials of the approach of British troops. “I really like the idea of tying things into history,” Mcfayden said, reminiscing about sessions at Maggie Walker where historian Edwin Slipek shared stories of Richmond’s yesteryears.

The RVA Collab House will occupy 4,000 square feet, a quarter of that for the brewery, with additional space in an outdoor courtyard. When the doors open in late June or early July, it will join an impressive array of imbibing destinations in Scott’s Addition—Isley, Ardent Craft Ales, The Veil Brewing Co., Black Heath Meadery, Buskey Cider—with Strangeways and Hardywood Park within a few minutes’ drive. Restaurants such as Lunch and Supper, Fat Dragon, Boulevard Burger & Brew and The Dairy Bar also feed the vibe.

“We got in at a good time. It’s crazy! It’s crazy!!!!” Thackery enthused. “It’s really cool to see a neighborhood that was not that great not very long ago taking on an important role in Richmond.”