Adventures and misadventures with beer and food

You don’t mind if I ramble, do you?

It’s been kind of a rambling week. Plus, my brain wants to go outside and play—it’s a crystalline day of robin’s-egg skies and golden sunshine.

Now that I think about it, the week does seem to have a theme. Always, there’s beer, but food played in a jumbo portion of activities and accidents.

The accident occurred after a toothsome time in Harrisonburg Wednesday evening. Adam Shifflett, co-founder of Brothers Craft Brewing, hosted a “Flights and Bites” six-course beer dinner featuring the culinary creativity of the chefs at Joshua Wilton House and Local Chop and Grill House. I had taken meticulous notes as Shifflett explained the beers and the chefs described the food. The next morning, however, I discovered that my dog had eaten my notes. Actually, if it was any critter, it was my cat, Bob, who lately has been wearing a mischievous grin that I don’t trust. Anyway, my notes had vanished.

But I do remember some high points (they were all high points, actually), beginning with a tart saison paired with Virginia blue crab salad with smoked salt dressing on Challah slider rolls. Yummy, since crab is one of my favorite edibles. The saison was almost too edgy for the subtleties of the crab salad, but the consensus at our table (I shared space with Annie Tobey, who needs no introduction, and two couples out for an evening of culinary exploration) was 12 thumbs up.

n stout aged in bourbon barrels. This final course earned the highest praise from our dinner mates, which surprised me because Resolute is an exquisitely complex and demanding beer at 13.5 percent ABV. Kudos to all concerned.

Friday afternoon, I got in another rambling mood and headed the Wrangler to Old Bust Head Brewing Company outside Warrenton. One of my RVA beer buddies, Shannon Ely, serves as a beer ambassador for the brand, and I was eager to visit a place whose brews I have enjoyed.

Chris Galiffa and I seem to run into each other at strange times and places, including Starr Hill as well as Old Bust Head (photo courtesy of Daddy G’s Rockin’ Salsa)

Well, low and behold, I walk in and my good friend Chris Galiffa, founder of Daddy G’s Rockin’ Salsa, is at the bar sampling a flight of brews. Chris and I have this strange cosmic thing going on where we bump into each other, completely out of the blue, at strange places (well, usually breweries). He is a dear fellow, and we always yack about beer, his salsa, mutual friends and music. He is indeed a rockin’ guy; he and David Hunter, founder of Fans of Virginia Craft Breweries, have been belting out great tunes as the Fredds for years. 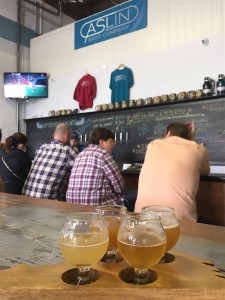 Aslin Beer Company draws a crowd on a Friday afternoon in Herndon. Photo by Lee Graves

I put together a mixed tape of Old Bust Head brews (if you have the English Style Pale Ale, let it warm up some—it brings out the wonderful bready character of the malt and the earthiness of the British Goldings and Fuggle hops) and headed for Aslin Beer Company in Herndon. While Old Bust Head created a feeling of space with long picnic tables and a capacious bar, Aslin was tucked in a tight warehouse space and had the chummy, elbow-to-elbow feel of your favorite semi-urban watering hole.

Though the brewery has only a two-barrel system and is not yet distributing, Aslin has created considerable buzz with imperial IPAs such as Master of Karate and Dunley Place (markedly different hop profiles in each) plus a surprisingly tawny saison called Animal (farm)House. I also sampled Deceiver, an imperial stout rich with silky chocolate and coffee notes, and their Lemon Strawberry Kölsch, which was refreshing but didn’t have the finish or depth of the others.

Now, the food part of Aslin comes through some mutual friends—Cody and Jenn Specketer, whose travels to Richmond were documented recently on their Bites, Barrels and Brews blog. The site describes two food adventures: one infusing Aslin’s Hoppy Brown Ale into what they deemed “the asshole of all baked goods”—the pumpkin roll; the other using Mind the Hop IPA for a fish-and-chips meal.

The folks at Aslin were gracious and spent time explaining their brews, the brewhouse and just chatting. Jeff Scott in particular was a welcome face. He had at one time worked at the same company with my son-in-law, Don Madden, and now is Aslin’s self-described “beer slinger/ambassador.” A more personable minister of beer could hardly be imagined.

I’m eager to return to Aslin and hope to swing by there this coming weekend, when another of my favorite NoVa breweries, Ocelot Brewing Company in Sterling, will celebrate its first anniversary. Their imperial IPAs linger in my memory from a previous visit.

To put a bow on this ramble-athon, I must confess that any and all of my writings concerning food must be taken with a grain of pepper. In the poker game of life, the Great Dealer in the Sky gave me four aces—a great family, awesome friends, a love of music and a talent for writing. But I got a two of clubs in one regard: foodiness. My diet is monkishly mundane, my culinary skills are childishly simplistic and my palate is frustratingly unsophisticated.

If you ever want a recipe for stovetop popcorn, an awesome PB&J sandwich or French toast, give me a shoot (beer pairings included). Otherwise, I have to wait for the Great Dealer to say “Deuces wild!” before I can speak with any authority or comfort about food.