In the Garden of Stone

If only Stone Brewing Co. could bottle some of this San Diego sunshine and send it to Richmond.

I’ve felt guilty basking in the warmth and brilliance of Southern California weather while RVA has been fighting ice and freezing temperatures recently.

To top it off, I’ve been savoring some of my favorite beers — Arrogant Bastard, Ruination IPA, Enjoy By IPA — fresh from the source.

A display at Stone Brewing Co. shows the hops, barley and water that go into its beers.

Some of those beers, and many more, will be coming to Richmond before long. And beer lovers can do as I’ve been doing — sitting in a spacious restaurant, strolling through manicured gardens and drinking unique beers while looking upon the gleaming tanks and bubbling fermenters that produce them.

I got an up-close-and-personal view of Stone’s Escondido operation, thanks to a trio of employees — Chris Cochran, community relations manager; Nickie Pena, media coordinator; and Sabrina LoPiccolo, public relations specialist. 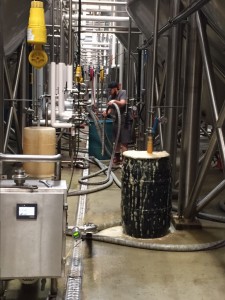 A fermentation tank does its job at Stone’s Escondido brewery.

Steve Gonzalez, Stone’s research and small batch manager, explained the six-barrel test batch system, where experimental recipes are developed in collaboration with brewmaster Mitch Steele. The test batches go through several stages of development, and potential brews are not unveiled until perfected. Gonzalez alluded to one batch he was working on but intimated he would have to kill me if he told me details. He did, however, let me pour in a bucket of Citra and Centennial hops (deftly done, I must say).

Steve Gonzalez tends to one of the test batches under development.

“Oh, you mean you drink it,” I attempted to quip.

“We like to call it tasting,” he said and smiled.

With each bottling run, they pull samples to test from the beginning, middle and end of the process. In addition, bottles from past runs, past years, are kept for reference. One bottle of Stone Old Guardian Barleywine dates to 2000, he said.

That’s not long after Greg Koch and Steve Wagner, homebrewing buddies and fellow musicians, launched Stone in nearby San Marcos. Since the founding in July 1996, they’ve relocated and expanded to meet demand and facilitate growth. Total barrelage in 2014 was just over 287,000, a 35 percent increase from 2013 and keeping Stone 10th among U.S. craft brewers. (One barrel equals 31 U.S. gallons.)

As my three hosts and I sat outside in that crystalline sunshine eating lunch, Cochran asked about Stone’s reception in the RVA beer community. I told him I had sent out an informal survey to RVA brewers and brewery owners to get a sense of their opinions. Those who responded were overwhelmingly positive about Stone’s products and having Stone come to Richmond.

They also expressed optimism about Stone’s impact on the local scene — a dozen breweries and counting. The major criticism focused on the deal that helped land Stone.

That deal includes roughly $7 million in city and state grants plus more money in incentives. The brewery will be constructed by the Richmond Economic Development Authority using about $23 million in city bonds; Stone will lease the building once it’s constructed. The second phase — the restaurant and beer garden — will also utilize city bonds to the tune of $8 million. A few other incentives sweeten the deal.

The brewers and beer lovers I have spoken with — and from what I have read in media coverage — say basically, “Treat the small local businesses the same way you treat the big guys.” Some in the Richmond area have had to machete through tangles of local bureaucracy and have not always felt fully embraced by local officials, though many acknowledge that is improving.

In an interview with Richmondbizsense.com, Koch responded to concerns about the city fronting construction of the facility. “The city is not bankrolling this project. … It would be much less expensive just to take some parcel and build a new building that doesn’t have all these complexities and challenges built into the project. However, this is a unique opportunity to revitalize a part of town and to work with the city to create an economically viable scenario. Just from a governmental perspective, or just from a private business perspective, this wouldn’t be viable to sink money into. But when we link arms and we say, ‘We can accomplish this together in a public-private partnership,’ then it makes sense, and here’s something the city and the region benefits from enormously because it’s taking something that’s non-economically viable and making it economically viable for both parties.”

Given those concerns, I told Cochran and the others that there is genuine excitement about Stone coming to RVA. And judging from my experience in San Diego, there is much to be excited about.

Two days before my official tour, I took a sneak preview of the Stone World Bistro and Garden in Escondido. The entrance facing Citracado Parkway is unassuming, with no garish signs and no glowering gargoyles (they are the signature element of the brewery’s logo, and though they look devilish, their menace is meant to ward off evil spirits).

You pass through a massive entrance of stone (what else?) into a store area with shirts, caps, books and more. The restaurant continues the stone theme with a touch of green from bamboo growing in the center. The room has a spacious feel with high ceilings and lots of elbowroom. The beer menu includes dozens of local, California and imported beers in addition to Stone products, and the draft list is split evenly between Stone and guest beers. I ordered the Tilapia Ceviche; it was fresh and delicious.

Beyond expansive glass walls, a patio extends the seated area (there’s an outside bar), and paths weave among pockets of lush vegetation, where picnic-style tables invite guests to lounge in that balmy sunshine (believe me, those folks need a good dose of RVA winter to appreciate their weather).

Taps feature guest beers as well as Stone brews in the Escondido bistro.

Cochran, Pena and LoPiccolo radiated enthusiasm about Stone’s operation (well, they’re paid to be enthusiastic but it comes across as genuine). Cochran rattled off numerous philanthropic endeavors that benefit from Stone’s involvement and largess (revenue in 2013 was $136.3 million, resulting in three-year growth of 118 percent). LoPiccolo described Stone’s 19-acre farm, which generates produce, eggs and other food items for the restaurant. Pena detailed the water conservation efforts — how 35,000 to 40,000 gallons of water a day are reclaimed for heating, cooling and other purposes (not brewing). She also talked about how Stone bottles and kegs are refrigerated almost from the moment they are packaged to ensure freshness.

I matched their enthusiasm when I talked about RVA’s scene — it’s small compared with the nearly 100 breweries in the San Diego area. But creativity and quality in Richmond have led to gold medals, glowing media reviews and growing national attention. The addition of Stone, I hope, will elevate Richmond’s status as a craft beer destination.

That will be a bright day indeed.

4 Responses to In the Garden of Stone