If you ever thought small brewers were small potatoes, the folks at the Brewers Association would like a few words with you. Or a few beers.

Described as constituting the “long end of the tail” of craft brewing, the small and independent brewers in the country have been the pioneers of a 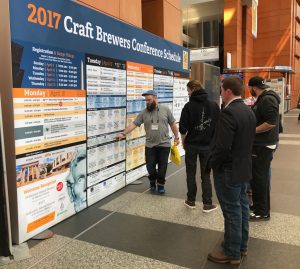 Thousands of craft brewers and beer lovers are in Washington, D.C., this week for the 2017 Craft Brewers Conference. Photo by Lee Graves

movement that has spread from the neighborhood taproom to more than 50 countries.

“[That’s] illustrating how local the craft brewing movement has become,” said Bob Pease, president and CEO of the Brewers Association. The non-profit trade group based in Colorado represents the nation’s small and independent brewers, thousands of whom are in Washington, D.C., this week for the 2017 Craft Brewers Conference.

“Small and independent does matter–it matters big-time,” added Rob Tod, chairman of the association’s board of directors and founder of Allagash Brewing Company in Maine. He noted that craft brewers are producing nearly 25 million barrels of beer annually. And while the industry’s rate of growth had declined steadily over recent years–growth was 6 percent by volume in 2016–the number of microbreweries in the country grew by 21 percent, boosting the total number of breweries in the country to 5,301.

Tod praised early craft brewers such as Ken Grossman of Sierra Nevada, Jim Koch of Boston Beer and Fritz Maytag of Anchor Brewing Company for their early efforts. “[They] stuck their neck out in a world of commoditized and industrialized beer.”

“We need to remind ourselves that before those pioneers got their start, there really weren’t too many communities in this entire country where someone was commercially making beer,” he said. “Fast forward to today. Instead of making that 25 million barrels in two or three facilities, we’re making it in thousands of facilities.” After illustrating how things have changed by taking a sip from a bottle of Optimal Wit brewed at nearby Port City in Alexandria, Tod added, “It’s no wonder the U.S. is the creative epicenter of beer today.”

Small brewers are hiring workers, spurring urban renewal, contributing to local causes and creating gathering places. “People are spending time together in our breweries,” he said.

Pease also stressed the importance of craft brewers adhering to their defining values–“independence, authenticity, a collaborative spirit and community-mindedness.”

A slightly different set of values–persistence, flexibility and not fearing failure–came into focus during the keynote address. Alison Levine, adventurer extraordinaire and author of the New York Times bestseller “On the Edge,” sprinkled nuggets of hard-earned insight in a lively recounting of her two attempts to climb Mount Everest.

The first came as leader of the American Women’s Everest Expedition in 2002. After preparing and hiking for two months to reach the tip of the 29,000-foot peak, a storm forced the team to turn back when only a few hundred yards from its goal.

“Backing up is not the same as backing down,” she stressed. “If the conditions aren’t right, you turn around, cut your losses and walk away.”

In a second solo eight years later after the death of a friend, Meg Berté Owen, she reached the summit. She had hiked without the team, but the effort required the concerted efforts of sponsors, friends and more. “Nobody gets to the top of the mountain by themselves,” she said.

The conference had its official kickoff reception Monday night with area brewers pouring beers at the Smithsonian National Museum of American History and the Smithsonian National Museum of Natural History. At the latter, crowds of brewers and beer lovers drank craft brews from plastic cups while gazing at the Hope Diamond or chatting in the shadow of a giant elephant frozen in mid-charge.

The conference continues through the week with seminars, roundtables, tap takeovers and a trade show.